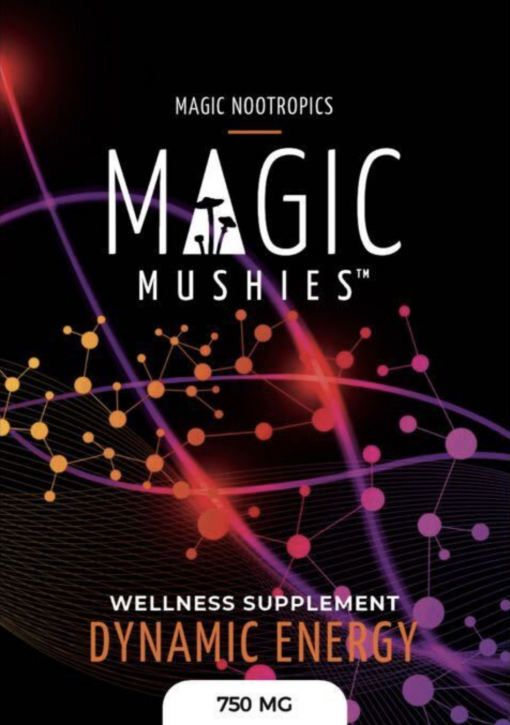 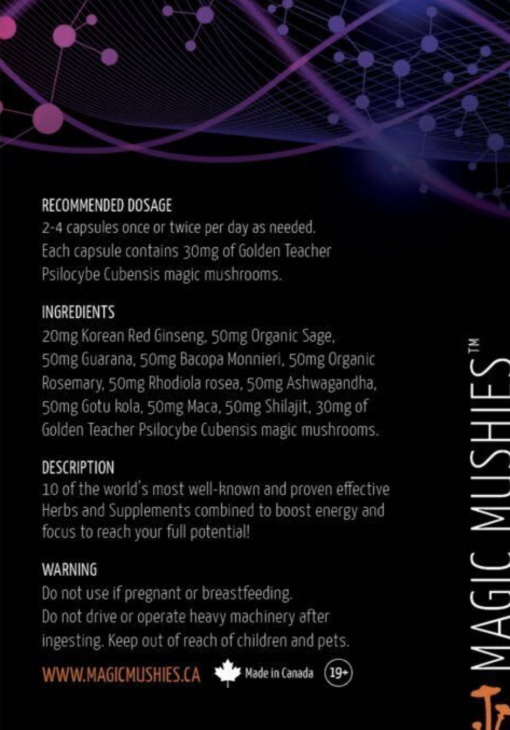 We have combined 10 of the world’s most well-known and proven effective Herbs and Supplements available to boost energy and focus to reach your full potential!

Recommended Daily Dosage: 2-4 capsules once or twice per day as needed

We have combined 10 of the world’s most well-known and proven effective Herbs and Supplements available to boost energy and focus to reach your full potential!

Korean Red Ginseng contains compounds that help boost alertness and concentration. When taken as a supplement, sage will improve mood, alertness, and attention span, as well as reduce fatigue in adults. Studies show that guarana is beneficial for brain function and help boost attention, alertness, and memory performance. Bacopa monnieriis a concentrated source of triterpenoid saponins, which are known as bacosides which have brain-function-boosting effects. Research shows that rosemary essential oil improves performance on cognitive tasks when inhaled or used as a supplement. When used as a supplement, Rhodiola roseaboosts energy levels, improve concentration, and boosts mood. Ashwagandha is a popular dietary supplement that boosts performance on cognitive tasks and improves sleep quality, mental alertness, and athletic performance. Gotu kola is an herb that improves memory, alertness, and mood when taken as a supplement. Plus, it may enhance strength and physical functioning in older adults. Studies show that supplementing with maca haspositive effects on athletic performance, mood, and energy levels. Shilajit naturally boosts your body’s mitochondrial function which will help improve energy levels. Shilajit is rich in fulvic acid, a strong antioxidant and anti-inflammatory, it may also protect against free radicals and cellular damage. As a result, regular use of shilajit may contribute to longevity, a slower aging process, and overall better health.

Recommended Daily Dosage: 2-4 capsules once or twice per day as needed

Ginseng is a popular herbal supplement, well known for its energy-boosting properties. It has also been shown to stimulate brain function, making it a sought-after herb for improving sports and mental performance. Panax ginseng is the most studied type in human trials (3Trusted Source).

Ginseng contains compounds, including ginsenosides, eleutherosides, and ciwujianosides, which are thought to give ginseng its performance- and energy-enhancing effects (3Trusted Source).

In a number of human studies, supplementing with ginseng has been shown to improve physical performance in sedentary and active people, offer anti-fatigue properties, and boost mental alertness (3Trusted Source).

Doses of 200–1,000 mg per day have been associated with beneficial effects on energy levels, concentration, and mood in adults (4Trusted Source, 5Trusted Source).

Keep in mind that ginseng use comes with potential side effects, including insomnia, diarrhea, and increased heart rate and blood pressure. Plus, this herb can interfere with common medications, such as those used to treat diabetes, depression, and heart disease (3Trusted Source).

Ginseng contains compounds that may help boost alertness and concentration, according to research studies.

Research shows that sage (Salvia) may have impressive cognitive-enhancing effects in adults. It’s high in many potent plant compounds, including luteolin, rosmarinic acid, camphor, quercetin, and apigenin, which give it its impressive medicinal properties (6Trusted Source).

When used as a supplement, sage has been shown to improve mood, alertness, attention, memory, and word recall in healthy younger and older adults (7Trusted Source).

For example, a study in 36 healthy adults found that treatment with 50 microliters (uL) of sage essential oil led to improvements in memory and attention tasks. Plus, it reduced mental fatigue and increased alertness over a 4-hour period (8Trusted Source).

Interestingly, sage acts as a powerful inhibitor of acetylcholinesterase (AChE). This enzyme that breaks down acetylcholine, a neurotransmitter that plays an important role in brain function, including memory, attention, and motivation (6Trusted Source).

When taken as a supplement, sage may help improve mood, alertness, and attention span, as well as reduce fatigue in adults.

Guarana is commonly used as an ingredient in energy drinks and supplements due to its stimulating effects. It contains an array of chemicals, including caffeine, saponins, and tannins, which are thought to provide beneficial effects on energy and brain function (1Trusted Source, 9Trusted Source).

Although guarana is generally considered safe, supplementing with it may lead to side effects like increased heart rate and anxiety when taken in high doses (14Trusted Source, 15Trusted Source).

Some studies show that guarana may be beneficial for brain function and help boost attention, alertness, and memory performance.

Bacopa monnieri is a plant that grows in wet, marshy areas throughout South Asia. It’s used in Ayurvedic medicine to treat a variety of ailments, including anxiety, insomnia, and memory issues (2Trusted Source).

Studies show that the plant may help boost brain function and alertness.

One review of 9 studies that included 518 people found that supplementing with around 300 mg of Bacopa monnieri extract daily improved brain function, especially the speed of information processing and reaction time (17Trusted Source).

Bacopa monnieri is generally considered safe, but it may cause side effects like digestive issues in some people and react with certain medications (18, 19Trusted Source).

Bacopa monnieri is a concentrated source of triterpenoid saponins, which are known as bacosides and may have brain-function-boosting effects.

While research suggests there are health benefits, the FDA doesn’t monitor or regulate the purity or quality of essential oils. It’s important to talk with your healthcare provider before you begin using essential oils and be sure to research the quality of a brand’s products. Always do a patch test before trying a new essential oil.

Like peppermint, the aroma of rosemary essential oil may help improve cognitive performance.

Inhaling rosemary essential oil allows compounds in the oil called terpenes to enter your bloodstream, from where they can directly affect your brain (24Trusted Source).

A study in 20 adults found that exposure to rosemary essential oil that was diffused into the air led to improved performance on cognitive tasks, including those that involved speed and accuracy (24Trusted Source).

Research shows that rosemary essential oil may help improve performance on cognitive tasks when inhaled or used as a supplement.

Rhodiola rosea is a plant that has been used for centuries in traditional medicine systems worldwide to improve memory, alertness, and endurance (26Trusted Source).

It has been shown to reduce mental fatigue, boost brain function and mood, and increase exercise performance in human and animal studies (27Trusted Source, 28Trusted Source).

Rhodiola rosea may be especially helpful for people who experience burnout, which is defined as “emotional, motivational, and physical exhaustion as a result of chronic occupational stress” (29Trusted Source).

A 12-week study in 118 people with burnout found that supplementing with 400 mg of Rhodiola rosea extract per day significantly improved feelings of exhaustion, impaired concentration, and lack of joy, compared with their baseline (30Trusted Source).

When used as a supplement, Rhodiola rosea may help boost energy levels, improve concentration, and boost mood, according to human research.

A number of studies have suggested that ashwagandha (Withania somnifera), an herb that has been used as an Ayurvedic remedy since ancient times, has powerful beneficial effects on brain function (33Trusted Source).

An 8-week study in 50 people demonstrated that supplementing with 600 mg of ashwagandha root extract per day significantly improved memory, attention, and information processing, compared with a placebo (34Trusted Source).

A review that included five studies found that supplementing with ashwagandha was well tolerated and led to improved performance on cognitive tasks, attention, and reaction time (35Trusted Source).

Research shows that ashwagandha may have beneficial effects on cellular energy production and be a helpful tool for enhancing athletic performance (37Trusted Source, 38Trusted Source).

Ashwagandha is a popular dietary supplement that may help boost performance on cognitive tasks and improve sleep quality, mental alertness, and athletic performance.

Gotu kola has been used in traditional medicine systems to help improve brain function, as well as studied for its beneficial effects on alertness and mood.

A 2-month study in 28 older adults who received 250–750-mg-doses of gotu kola extract per day found that those taking the highest dose experienced improvements in working memory, alertness, and self-rated mood, compared with a control group (39Trusted Source).

Another 3-month study in 80 older adults demonstrated that supplementing with 500 mg and 750 mg of gotu kola extract per day significantly improved strength and physical functioning, compared with a placebo group (40Trusted Source).

What’s more, a study that included 33 people with anxiety found that supplementing with 1,000 mg of gotu kola extract per day for 2 months helped improve attention and reduce their anxiety and mental fatigue rate, compared with their baseline (41Trusted Source).

Gotu kola is an herb that may help improve memory, alertness, and mood when taken as a supplement. Plus, it may enhance strength and physical functioning in older adults.

A study in 50 men with erectile dysfunction found that treatment with 2,400 mg of dry maca extract for 12 weeks significantly improved physical and social performance, compared with a placebo (43Trusted Source).

Maca has also been shown to improve athletic performance and have positive effects on mood and energy levels in human studies (44Trusted Source, 45Trusted Source).

Studies show that supplementing with maca may have positive effects on athletic performance, mood, and energy levels.

Spanish
0
0
Your Cart
Your cart is emptyReturn to Shop